Free radicals are a type of highly reactive molecule that causes oxidation in cells. Cells generally make proteins, known as antioxidants that have the ability to “mop up” the harmful free radicals and thus prevent injury to the cell. When atoms come together, they form molecules. How those molecules are formed is through forming together the electrons of the atom. Electrons prefer being in pairs. If comes along something (like oxygen) and this molecule has striped off an electron, this molecule has now a unpaired and a free electron. This creates an unhappy electron a a result of missing its partner. Behaving now quite radically – which is why it’s called a free radical. Detoxapet™ is a holistic pet health product, which supports your pet’s free radical toxic assault. When this happens in the body, that free radical will look to find an electron anywhere it can. If it finds an electron on a good cell, it grabs it from that cell, and damages it during this process, thereby causing an additional free radical. This biological process repeats in infinitum until the free radical meets up with a molecule that has an extra electron that it can donate to the equation to stop the reaction. Choose holistic pet health, choose Detoxapet™.

Science know that toxins in the body of your pet multiplies free radical activity and chain reactions many thousands, and probably several million-times. When a metal atom in the body is hit with free radical molecules, the outcome becomes compounded several times over – oxidation in the body is associated with little molecules known as free radicals. Detoxapet holistic pet health products products are a necessary part of your pets daily regime. It’s impossible for our pets to be alive today and not have some oxidative damage, and we take supplements for our own health which is why the right pet health supplements for your pet are also important. The right pet health products do make a huge difference in your pet. Free radicals are produced by normal processes in the body, such as the production of energy and immune function. In nature, oxygen will easily snatch electrons from molecules.

keeps your pet clean and detoxified

When molecules give up electrons, this is called oxidation. Because most everything in nature is exposed to oxygen, most everything in nature undergoes the process of oxidation. Basically, things exposed to oxygen become “oxidized”. To give you a good example of this process, just think about a piece of iron left out in the back yard. Over a period of a few weeks, that iron will have a thin coating of rust on its surface. How did this happen? Essentially the electrons in the molecules of iron freely gave themselves up to the oxygen around them. Well guess what? Our pet’s breathe oxygen. And over time they oxidize – or you could say they rust. This process is accelerated dramatically with today’s modern pet who’s being exposed to numerous toxins, further aggravating free radical activity. The foundation of intelligent holistic pet health is in keeping your pet’s body clean and detoxified. 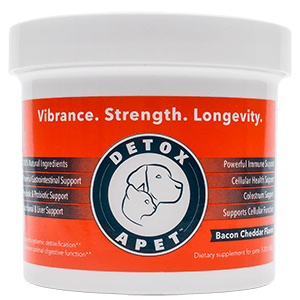 TOO TOXIC FOR DOGS AND CATS

You your dog’s body is amazingly intricate and delicate machine, and it has many self regulating capabilities, it has a rather incredible immune system with many components. But what does your vets do with your dogs immune system? They ignore it, and don’t deal with the immune system. They have other barbaric methods that involve petrochemical pharmacological poisoning agents that are patented by these pharmaceutical companies, to solve all the ills that you may present upon your vet.

Maltese had bumps on back like chicken pox, gone in 10 days!

My little Maltese has allergies. He gets bumps on his back that turn into scabs. He had them all over his back, like a bad case of chicken pox. I started him on Detoxa-pet , one dose a day, and they were gone in about 10 days! He is 9 years old and seems to have a lot of energy on this as well, acts like a puppy. I will continue him on this as I love all the quality ingredients they put in there and all these ingredients are so good for our little fur babies! Oh, also great customer service as well!